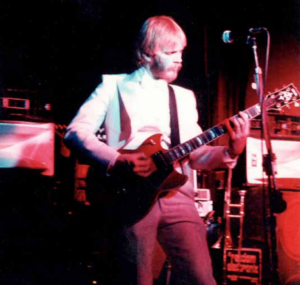 Back in 1980, my ex-wife wanted to start a band. She came here with a show band that was playing the summer of 1979 at The Fountains, which is where Osage Hills Church is now. I was going to run sound and lights for the band, because at that time I knew about three chords on the guitar, and only sang around the campfire with my drunken buddies. We put an ad in the paper and had several musicians try out.

One drummer pulled up in an old ’70s Blazer with Iowa plates and full of drum cases; he was Tom Willingham, the brother of Rudy Willingham who owned Lake Lumber at the time. Tom had just moved here and saw the ad. We had a couple of bass players come and go, then one day the sound engineer from Lee Mace’s studio called us and said he knew a great bass player from Des Moines, Iowa, whom they wanted down here to read and write charts at the studio. So a few days later Bob Copper pulled into the drive. He set up his amp and said, “I have two weeks; if we don’t have any gigs by then I have to go back to Iowa.” So we got a lead guitar player named Doug Haush, but we couldn’t find another guitar player, so I started learning the songs and practicing with the guys until we could find someone who knew what they were doing.

I kept practicing and we came up with a name: Cuttin’ Loose. Two weeks later we had our first gig. And then we played on the Larry Don boat the whole summer of 1980. We ended up being the house band at The One Note Lounge for the next year. Then we had to change bass players; Bob Copper went on to the St. Louis School of Music, got a doctorate degree in music and ended up in Kansas City as a professor of music. We picked up an excellent bass player and singer named Denny Freeman. I wish I knew where he ended up!

I had that band for a couple of years, then we changed drummer, bass player and lead guitar for a whole new band. We kept the same name, but played different music. Now it was a kickass Southern rock band with the stars of the show being Ron Rosalie on lead guitar, Bobby Klager on drums and Mr. Graves on bass. I learned a lot from all these guys… They all were really talented musicians, and it had all started with an ad in the paper.

In 1983 my ex and I took off on the road as a duo. We played about 14 different states in three years, playing five nights a week with only one week off. We played lots of Top 40 crap, tons of Madonna—it was good money, but I hated it. My ex and I split up, and I put together a country rock band with my old bass player Denny Freeman. At the time, I opened a country bar called Sticky’s Saloon. That was in 1987 and very short-lived.

When I closed it, I headed back out on the road as a solo act. I spent a couple of years in hotels playing songs I hated and where I had to wear suits—it sucked. When I came back to the Lake I decided I would never again play songs I didn’t like, and I was going to only play where I wanted to play, and I would never again wear shoes when I played, and that’s worked out so far.

Most of you know the rest of the story. I have played just about every bar at the Lake at some time or another. My first water bar was Funky’s (now Backwater Jacks), and then I played Eddie’s Sports Bar where I met Mark Barrett, who had just opened the Salty Dog. He and his woman at the time came in Eddie’s every Friday where I was playing Happy Hour, and he would buy me many shots. Then he would begin to talk me into coming to work for him, quote, “just come and do a few weekends for me, Dale.” Well, 19 years and 4 to 5 shows a week later! What a great run!

Purchase this issue of L•O PROFILE Magazine to continue reading.