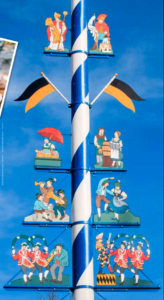 Yearly, in the merry month of May, German-speaking societies rejoice and celebrate the passing of winter at their Maifest, as they anticipate a marvelous and successful growing season. At these county fair celebrations, attendees consume copious amounts of beer and Maiwein as they devour pig knuckles, wursts, cabbages, sauerkraut, pretzels, meatballs made from pork, veal and beef combinations, noodles, potato salad and so forth.

Maiwein is a punch concocted from white wine combined with Weinbrand—which is a Brandy, along with simple syrup and Waldmeister, known in English as the Woodruff herb. In late April this herb pushes through the dead decomposing leaves from the past year, and a little white flower, similar to the strawberry blossom, appears among the crocuses. The scent of the Waldmeister gives the Maiwein its unique fragrance and a natural pairing libation with hearty foods. You would be familiar with the scent of Waldmeister if you use potpourri to refresh the odors in your home. The Waldmeister is alleged to repel insects and is believed to treat headaches, colds, stomach ailments and love sickness.

While in the Dutch Army we filled the large canvas bags that were to be used as our mattresses with straw and Woodruff to repel insects, mites and fleas, and which created a pleasant scent that helped negate the odor of 20 soldiers who showered once a week, if at all. At Maifest in Germany and other European countries and many German communities here in the United States, there will be contests and games such as tug-of-war, bobbing for apples, fetching the prize attached to the top of a tall greased telephone pole, arm wrestling, pole vaulting, broad jumps, trying to catch a greased baby pig, log-splitting contests and so much more, along with whoop-la-la dancing to accordion and tuba or oom-pa-pa music, along with lots of other merriment.

Maidens will dance in dracht (original German costumes) around the May Pole with colorful ribbons, and men will be attired in lederhosen. This is derivative of the original Batavians from the Bronze Age who clothed themselves for warmth, shelter from the weather and modesty.

If you look at a phone book anywhere in mid-Missouri you will find a multitude of German last names; evidence of the German immigrants who settled here. One of the most famous, known worldwide, is Adolphus Busch, making his world-famous brew. German perfectionism in agriculture and winemaking have afforded them the opportunity to win medals in worldwide competitions, evidencing their unique abilities before Prohibition.

The German pioneers settled in mid-Missouri due to its terroir being similar to the German Heimat (homeland) that is conducive to creating vineyards for the wine that is part of the German daily diet. It was also an ideal location for trading their agriculture on boats moored along the banks of the Missouri and Mississippi rivers, where roads and cartage were undeveloped.

My local friends shared with me that their grandparents, wanting or needing to be secretive, still spoke German at home. This revealed to me that current generations are not that far removed from their original German immigrant ancestors, and keep alive many of their traditions such as Maifest.

Purchase an issue to read more about Maifest.