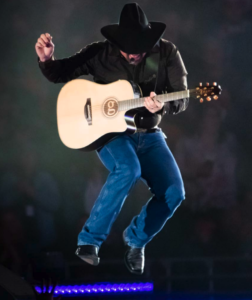 He has surpassed Elvis Presley in album sales and yields the power to sell out stadiums (worldwide) within mere minutes, but those appear to be simple side effects for the 56-year-old singer from Oklahoma.

Shocking the music industry and fans alike, Brooks retired at the top of his game in October 2000 to raise his three daughters near Claremore, Oklahoma. Yet, what shocked everyone even more was his ability to return to the musical arena a decade later as if he had never left.

Embarking on his unprecedented Stadium Tour across the United States, Brooks purposely chose St. Louis, Missouri, as his kickoff point on March 9, 2019. It wasn’t his first trip to Missouri. In fact, Brooks has a long history with the Show-Me state that began before he was born.

BLAME IT ALL ON HIS ROOTS Colleen (McElroy) Brooks was more than just the mother of this famous singer. Born in Kansas City, Missouri, on July 10, 1929, the strong-willed female performer became a regular on the popular 1950s television series Red Foley’s Ozark Jubilee in Springfield. She also earned her own recording contract with Capitol Records under the name Colleen Carroll.

Ultimately realizing family life was her passion, she met Troyal Raymond Brooks, an oil company draughtsman, and built a family with their four existing children: Jerome, James, Betsy and Michael. Settling in Yukon, Oklahoma, the couple married on January 27, 1957, and together gave birth to two more sons: Kelly, and their youngest, Garth, on February 7, 1962.

Though Brooks’ parents have passed on, he certainly remembers the impact they had on his life. “I think what my mom loved about me was I was always the happy kid,” Brooks shared with reporters at The Dome at America’s Center in St. Louis. “But the reason I was always the happy kid was because I was the last one. So, my older brothers always said it’s rose-colored glasses. But if you grew up in the family we grew up in, it was pretty physical, pretty loud and volatile sometimes. I was always the kid saying, ‘Hey why can’t we all get along? We’re good here!’ But you’ve got five boys in a house, you’ve got a father who’s a former Marine and a boxing champion—it’s gonna get physical. I was always the happy guy trying to find the silver lining in every situation.”

When L•O PROFILE asked the performer to expand upon his ties to the state of Missouri, he was quick to respond, “Where do you want to start?”

Playing concerts in his early days, Brooks performed as an opening act for Reba McEntire in Joplin; Kenny Rogers in Cape Girardeau; and even claims that playing the Sikeston Rodeo was one of the best moments of his early career.

“My first taste of Missouri was when my brother (Michael Brooks) was stationed at Fort Leonard Wood,” Brooks says. Michael went on to become an English teacher and principal of a Catholic school in Rolla, raising his family and eventually retiring there.

“Missouri is a fun place, but I think my greatest memories have to be getting to play here in St. Louis and having those moments,” he says. Choosing The Gateway City as the first stop for the Stadium Tour was an easy decision for the country star, who explained that the love he felt from fans during his four-night run during the Ferguson unrest in 2014 stayed with him. Brooks has long believed that music has the power to heal.

“This city was going through a pretty tough time right about that time and all I saw was just four nights of love, warmth and sweetness,” Brooks says. “So when we said ‘Where do we start?’ for me, it was that warmth and love that made me say, ‘let’s start in St. Louis.’ It just made perfect sense to start here.” Brooks says that when planning any tour you most definitely have to look at St. Louis and Kansas City, “You do not do a tour without those two cities, you just don’t, because if you do you’re going to rob yourself of some of your best times.”

HE’S SHAMELESS On stage, Brooks does not disappoint. His uncanny ability to sing his biggest hits perfectly, without changing them up, is a gift he gives to fans both new and old. Relentlessly hammering fans with one hit after another, the singer screams with excitement and smiles with delight at the near chaotic response his music evokes. Dancing, singing, swaying, screaming and clapping their way through the live show—Brooks lovingly has no mercy for his audience.

“You have to give the fans what they want. The worst thing you can do is drop an entirely new album on them at a concert,” he says. Performing nearly 30 songs during his St. Louis stop, he left no musical stone unturned with such hits as “The Dance,” “Callin’ Baton Rouge,” “The River” and “Friends in Low Places.”

When high winds and thunder rolled into St. Louis on the open- ing day of his tour, wife Trisha Yearwood had to cancel her Tailgate Party charity event, yet made a special appearance at the concert that night. Met by a roaring response that rivaled the welcome Brooks received, Yearwood turned to her husband of 14 years and sarcastically quipped, “Nice crowd.” Brooks joked with his fans that he would have to address the warm welcome for his wife with them a little later.

The duo then played two songs together, including one of her biggest hits, “She’s in Love with the Boy.” Yearwood’s quick set ended with a sweet, audience-approved kiss between the two music superstars.

Purchase an issue to read more about Garth Brooks and his legacy.