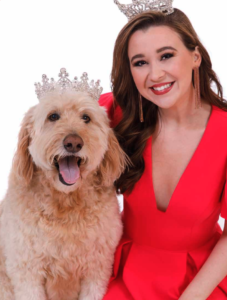 “Wellness is multi-faceted,” Callie highlights. “It’s being spiritually, physically, and mentally well. It’s finding my rhythm and rituals that give me a breather before I go out to start my day. I love my slow mornings drinking my coffee.”

“I love being able to move my body and remembering that I’m fortunate to be able to do that, and I want to honor that,” she says. To help keep fit, Callie takes walks outdoors and enjoys barre classes indoors in Columbia, Missouri, where she’s a senior attending the University of Missouri Columbia.

Exercise allows her to move her mind as well. “I take pride in my self-care practices,” she adds. These include her face masks, bubble baths, and her hot cup of tea or coffee in the morning. Plus, she takes a step back now and then from her whirlwind schedule and is okay to be by herself to take an afternoon and read a book. “That’s what works for me, and I know it’s different for everyone.” She is also typically an “in bed by 9:00 pm” type of person as well. “I don’t stay out too late, that’s for sure,” she adds.

Her early-to-bed schedule may have started as a youth growing up on her family’s generational, row crop farm in Audrain County. Her “roots run deep” in small-town, Mid-Missouri, and the charm it holds with its close family ties and tight-knit community.

Callie has a younger brother who’s 16 and involved in FFA (Future Farmers of America), and plans on being the third generation to run their generational family farm. Her parents are farmers who typically drive combines and tractors and taught her to dream big. “They are my rocks and top cheerleaders,” she exudes.

“I’ve grown up around hard workers and dedicated people who know how to cling to hope,” she says. “Because I think farming and our culture is a perfect illustration of what it means to have faith and have hope. Growing up around that has been amazing. I’m really lucky to have a close relationship with my brother, my parents, and my late grandparents.”

Callie has danced since age three and been involved in the performing arts since she was eight years old. “I was and am a theater girl,” she enthusiastically declares. “I love singing and have from a very young age. Starting at the age of three, I was involved in a variety of artsy activities.” She recalled cutting her long hair very short to play Tiny Tim as her mother played Mrs. Cratchit in a production of A Christmas Carol. A favorite farm memory was when her dad taught her how to drive in the middle of a massive field when she was young.

She also has “many, many” memories of summers at the Lake of the Ozarks with her family. Playing Skeeball on The Strip with cousins or shopping and chatting with friends on the dock are just a few. “The Lake is such a central ground to reunite families and bring them together,” she believes.

When Callie was in seventh grade, she remembers a pivotal moment. She was paired with a classmate to sing a duet. They visited before rehearsing, and she learned her classmate was diagnosed with Autism and had a physical disability. In addition to his passion for performance, he desired not to be defined by his disabilities.” He just had different abilities than I did,” she says after getting to know him. “This shifted how I was going to look at every student in my class as well as all people for the rest of my life.”

Callie’s time at Camp Barnabas, near Monett, MO is yet another life-changing experience that Callie deems “changed the trajectory of my life.” Callie’s involvement with Camp Barnabas, a summer camp for individuals with different abilities, started in middle school. She continued to serve at this camp for many summers. “Inside the gates at Camp, we say, ‘Yes!’ and I want to bring that ‘Yes!’ outside the gates of Camp Barnabas.

Most of Callie’s life growing up in Mexico, MO was in the same location of the Miss Missouri competition for the last 50 years. She remembers being a Little Sister in Miss Missouri’s mentorship program at age 10. Her big sister, a Miss Missouri candidate, Seanica Otterby, was one of her greatest mentors (along with her dance instructor, Miss Janet Graham). She motivated Callie and “shooed” her to get involved in this organization. “Any time we talk, she says, ‘Yes, how can I help?’ She has shown me what it means to be a mentor for younger girls now.”

As if Callie wasn’t busy enough during this time, she also attained her associate’s degree from Moberly Area Community College.

In 2019, Callie won the Miss Zona Rosa title with great mentorship support in North Kansas City, MO. She held that title for two years, as the Covid-19 pandemic placed the competition on hold. Finally, in June of 2021, she competed in the Miss Missouri competition and won it all.

Purchase an issue to read more about Callie Cox and her instinct to impact.