The Tale of Ozark 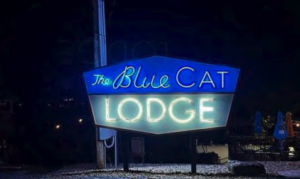 The hit Netflix series, which debuted in 2017, took the world by storm and shined a flurry of international attention on the already popular Lake area. While undoubtedly creating a phenomenon that will impact the area for years to come, Bill Dubuque and his family shy away from the attention, understandably keeping a low profile during visits to Lake of the Ozarks.

How OZARK All Began

Growing up, spending summers with his family at Lake of the Ozarks, Dubuque would take on a summer job at the Alhonna Resort and Marina as a teenager in the 1980s. The St. Louis native enjoyed learning about the Lake and would catalog rumors and stories he heard while working as a handyman and dockhand at the resort. No one would have guessed that the little resort nestled on this Lake would one day become an iconic venue that later would inspire an award-winning screenplay, taking its place in television history for inspiring the acclaimed show.

After graduation from Rosary (Trinity) High School in 1984, Dubuque decided to stay settled in the St. Louis area with his wife Tara and their three children. Spending 12 years as a corporate headhunter, Dubuque felt he may have a calling for screenwriting. He read every book he could find on the subject and in 2008 decided to change his career trajectory at 42. It worked.

He would get the attention of Hollywood with the rewrite of the script for The Judge, featuring Robert Downey, Jr., and shortly after, he penned another script for The Accountant, which starred Ben Affleck. The table had been set for him to create the premise for OZARK and write the first two episodes.

“Residents and regular visitors to the Lake might have expected Hollywood to take a simplistic view of life there and dumb it down, but I wanted to capture the intelligence of business and capitalism around the Lake. Intelligence, after all, isn’t a geographical thing,” Dubuque told the St. Louis Post-Dispatch in 2017.

Dubuque would sell the OZARK series to Netflix for a cool $7 million dollars before handing the writing duties of the show over to showrunner Chris Mundy and his team of writers.

Dubuque fell in love with Lake of the Ozarks with all of its wonders and possibilities as a young man. He still lives in St. Louis and frequents the Lake with his family each summer. As Dubuque knows firsthand, “There’s nothing like it.”

Take a corporate headhunter-turned-screenwriter from St. Louis. Ask him to create a script about Lake of the Ozarks for Netflix; then sit back and enjoy the show! If you’re one of the few who weren’t aware, the series followed Chicago financial advisor Marty Byrde (Jason Bateman), who accidentally got wrapped up in a money-laundering scheme for a Mexican drug cartel. He whisked his family away to Lake of the Ozarks, where he had to appease the cartel to stay alive by setting up a more extensive operation. Marty and his wife Wendy (Laura Linney) encountered some interesting locals, such as Ruth Langmore (Julia Garner), who also became involved in the scheme. Chaos engulfed nearly every episode of OZARK with new ways to launder money, the demise of many who knew too much, and the lack of any moral compass.

The OZARK series would complete 44 episodes, kicking off its fourth and final season this past January by topping four billion minutes of viewing time in just one week. It’s only the fourth time that has happened with a series of any kind. Accolades would also adorn the series with 32 Emmy Award nominations for writing, editing, cinematography, sound mixing, music composition, and makeup. It took home two Emmys for Best Supporting Actress (and breakout star) Julia Garner and another for Jason Bateman for Outstanding Director in a Drama Series. The series would also accumulate ten Screen Actor Guild nominations with two wins for Outstanding Actor in a Drama Series for Jason Bateman.

The Brilliance of Bateman

Give Jason Bateman a role, and he will bring an audience. The beloved actor who has worked in Hollywood for 43 years took charge as the lead character in OZARK and was the director for four of the first ten episodes and the entire second season. His calm demeanor amidst utterly impossible circumstances made Marty Byrde a likable character who fans rooted for even while he participated in illegal activities. Bringing Bateman on board for the series solidified that the show would have a loyal following from the start.

Lake of the Ozarks debut in a Netflix Series

Bateman, Dubuque, and the OZARK production team researched the Lake of the Ozarks during their multiple scouting visits beginning in March 2016, with the decision to begin filming in August 2016. They studied many iconic historic landmarks and businesses to get the feel and location details. The scouting visits included all areas of the Lake from Gravois Mills to Greenview to Lake Ozark. Noted locations that the OZARK cast and Production Team had spent time, including filming, were the Glory Hole Bar, Chances R Restaurant, Lover’s Leap, Party Cove, Stewart’s Restaurant, DogPatch Arcade, The Strip, Lodge of Four Seasons, Tucker’s Shuckers Bar and Grill, The iconic bluff–HH, Alhonna Resort and Marina and others. It was Alhonna Resort where the cabins were studied extensively to recreate them for the film set in Georgia. The bar in the Glory Hole also was recreated on a soundstage set for filming. While the team wished they could have filmed exclusively at Lake of the Ozarks, the lack of Missouri state tax breaks for filming didn’t allow much of the show to be shot in Missouri.

Purchase this issue to read more about the Lake of the Ozarks.