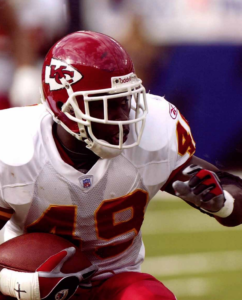 Tony Richardson, aka T-Rich, proudly wore #49 on the field in the NFL for 17 years and went to 4 Pro Bowls. Thanks to his father, Sergeant Major Ben Richardson, and NFL mentors, Richardson learned that being a professional football player meant more than just practices and games—it meant giving back.

When Tony Richardson walked into Revocup, his favorite Kansas City coffee shop, he ordered the “Tony Special” (a dirty Chai latte made with soy milk). Richardson says it’s the best coffee in Kansas City, but there was more to the story. After becoming a regular at Revocup and be- coming friends with the co-founder, Habte Mesfin, Richardson realized it wasn’t just the great coffee that he loved about this coffee house. It was what went on behind the scenes-one of the things he does best-give back.

“Coffee producers are from some of the poorest countries in the world,” Richardson said. “If everyone who drank coffee was willing to donate 10 cents a cup like at Revocup, think how much change we could make in those countries. Habte (a native Ethiopian) talked to one of his farmers and told him that coffee cost $4-$5 a cup in America, and the farmer started crying because they don’t see that return so that’s what we are working on together-raising awareness.”

Richardson’s journey has taught him about people and community. He was born in Frankfurt, Germany where his father, Sergeant Major Ben Richardson was stationed. His mother, Patricia, was busy raising 7 children, Tony being the youngest.

“It was tough in Germany. I didn’t really have any childhood friends because we were moving every 2-3 years,” Richardson said. “It taught me about diversity and the different cultures. I never had a chance to see race. I never had a chance to see color.” Richardson was 15 when they moved back to Daleville, Alabama (a town with only 2 stoplights). He knew soccer, but the kids he wanted to be friends with were playing football. Having never played before, he joined the highschool team, but his first day of practice was a little intense.

“The first time I went into the locker room, I had no idea where to put the thigh pads or the knee pads,” Richardson said, “I was literally sitting there watching. I didn’t want to let them know I didn’t know how to play the game. Then the first game I ran an 80 yard touchdown.”

Richardson was a football star during the week but had chores every weekend. He appreciates it now, and that discipline and structure helped mold him into the person he is today. “My dad would have me go outside to wash the car,” he said, “so of course, as a kid, I knew he was watching out the window so I just washed one side of the car and it was spotless. I didn’t touch the other side. So I am out playing and all of a sudden my dad is yelling down the street. He made me wash the car like 3 times to get it right. That was a great lesson; if you start something, you finish it.”

To read the full article, purchase this issue of L•O PROFILE Magazine.