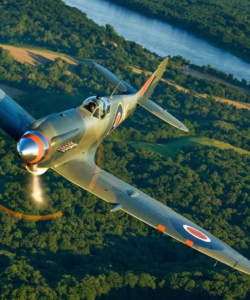 Dr. Wes Stricker is a medical doctor who loves and collects airplanes. A gem in
his collection is the world’s only flying example of a Supermarine Seafire XV carrier-based WWII British fighter. The Seafire XV is something of a hot rod among military aircraft. It has the highest horsepower-to-weight ratio of its group and could out-climb all other WWII fighters. A Japanese Zero climbs at 2,710 feet/minute; a German ME-109 at 3,427 feet/minute; an American P-51 at 3,500 feet/minute. But the Seafire XV could climb faster than most of today’s corporate twin-engine jets can climb, at the rate of 5,000 feet/minute. When armed, it could also pack a mean wallop with two .20mm cannons, four .303 caliber machine guns and a couple of bombs. A 90-gallon drop fuel tank extended its combat range to 900 miles.

The Seafire was a carrier-based warplane made to defend British ships. Early Seafire models flew off the coasts of Italy and France. Later models were deployed extensively in the Pacific. The fighter was pur- posely designed to reach altitude as quickly as possible to cover ships below. Such rapid ascent was made possible with a Rolls-Royce Griffon Mk. VI water-cooled V-12 engine. Its supercharged 2,240 cubic inches pack 1850 horsepower in a very light single-seat fighter aircraft with a giant propeller. A similar Rolls-Royce Griffon engine powered the Miss Budweiser Unlimited Hydroplane in 1980.

Seafire is the abbreviated name for a Sea Spitfire. The Spitfire was a remarkable British warplane introduced in 1935 as an interceptor. WWII demanded it be refined, redesigned and fortified for aircraft carrier operations. Many early Seafires and so-called hooked-Spitfires were damaged or lost in punishing carrier landings, resulting in many redesigns (or “Marks”). Including six prototypes, a total of 396 Seafire Mk. XVs were built. Dr. Stricker’s is the last Seafire XV still flying. His Seafire Mk.XV PR503 literally first reappeared on the radar at a 2010 airshow. PR503 had last flown in 1950.

The Thrill of the Flight
What attracted Dr. Stricker to the Seafire XV was its rarity and ties to WWII. Dr. Stricker’s father, Major Eamil A. Stricker, was a United States Army Air Corps Flight Surgeon in the 339th Fighter Group that flew P-51s in combat during WWII. The Seafire XV isn’t the only WWII aircraft in his squadron. Doc Wes, as his friends call him, also owns a North American P-51 Mustang that was named “Kansas City Kitty” in WWII, a North American AT-6D, a Grumman TBE-3E Avenger, and a 1939 model Grumman Goose “flying boat” that served in the RAF during WWII.

The Seafire XV provides a solo thrill as powerful and unique as the aircraft itself. When asked how the ride compares to a video game or race boat, Doc Wes replied, “The noise, acceleration, G-loads and free- dom experienced in a WWII fighter just can’t be replicated in a video game, and I’ve not seen a boat yet that I’d like to ride at 400mph!” Top airspeed for his Seafire XV is 400mph.

Pull the stick back and at the full 5,000 feet/minute climb rate the pilot feels 3Gs of pure acceleration. During maneuvers, forces can range from +8 to -4Gs, thanks to its tremendous power and large elliptical wings. By comparison, the greatest roller-coaster G force in the world is 6.3G at South Africa’s ‘Tower of Terror’. Six Flags Over Texas’ ‘Shock Wave’ ranks second at 5.9G.

Found in Burma
Doc Wes once owned two Supermarine Seafires. “We recovered a number of airplanes in Burma years ago,” Doc Wes says. “One was an Mk.XV Seafire (SR462).” It was the rarest of the finds, and Doc Wes chose to restore it first. About that time in 2005, another Seafire (PR503) came up for private sale and it had an interesting history. The war was over when PR503 went into service in 1945. In 1950, with less than 500 hours on it, the engine was removed and the airframe was put into reserve storage, then ultimately assigned to a firefighting training unit. It and another Seafire were later rescued and hidden away. The other Seafire sits on static display at a museum in Calgary, Canada.

A total of 2,300 Seafires with different 8 Mk. models were built. Only 17 complete airframes remain today. Four of those are Mk. XV models. The only one flying is Doc Wes’ PR503.