A Few Facts About the Swiss 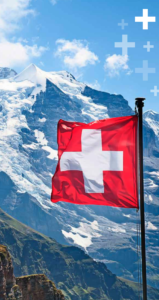 Schweizz-Suisse-Svizzera-Switzerland are monikers for the trilingual country in central Europe. Switzerland, a country about two times the size of New Jersey, is bordered by Italy, France, Germany and Lichtenstein. This landlocked mountainous haven is home to two very large lakes, Lake Geneva and Lake Maggiora; a unique climate with crisp snow in the higher mountains favored by skiers; and first-class rejuvenating health resorts.

The country is well known for bank secrecy, precision instruments such as watches, Swiss chocolates and numerous farmed cheeses with their own unique tastes due to differing methods of cheesemaking. In the spring the fresh fodder affects the taste of the cow’s milk, which in turn affects the taste of the cheese. The many cheeses of Switzerland acquire their discernable taste differences due to many factors, such as whether whole milk, fat milk, skimmed milk or pasteurized milk is used; the hay in the winter differs from the fresh fodder of spring which also differs from valley to valley; even aging inside in cellars will differ from aging in the cool outside.

The Matterhorn is the tallest mountain and is surrounded by some 8 million Swiss-born citizens, about the same population as the city of New York, and another one million guest itinerant hospitality industry workers. At the age of 18, I too was one of the hospitality workers who came to Switzerland from Holland to learn German in the Kanton of St. Gallen at the Grand Hotel Hof Bad Ragaz (Google this hotel, it is phenomenal). The rich and famous guests drank the finest wines originating mostly from France and Germany. The custom was to leave a little wine in the glass. This acquainted me with some bouquets of fine wines as I hand-washed and -dried the precious lead-crystal glasses that were left behind from the parties the night before filled with dregs. The exposure to these fragrant remnants helped me in identifying great wines, and continues to guide me in my wine experiences even today.

Most of the wines produced in Switzerland are made from three varietals, although many others are cultivated. They are Pinot Noir, also known as Blauburgunder, and Chasselas and the Gamay. These three predominant varietals are produced in the perfected methods of their bordering countries’ vineyards. Meticulous attention to pruning, channeling of the vines and further exceptional sun and wind exposures results in grapes and wines the Swiss prefer to keep and imbibe themselves. Furthermore, differing elevations, microclimates and the exposure to wind and sun yields discernable taste nuances.

Swiss wines are sold in bottles, but more often in barrels for use in restaurant and hotel decanter sales. These wines are perfect companions for fabulous indigenous beef, pork, goat, sheep and duck, as well as other protein entrées available to the Swiss, each unique to the food the animals consume affecting taste and texture. Swiss food products are impossible to duplicate elsewhere because of the fodder unique to the terroire of the valleys with which the animals are nourished.

Gruyere cheese comes in 45kg hard rounds and has larger holes than Emmenthal, although it’s a similar cheese. Gruyere, with its nutty and buttery taste was served daily to the staff for breakfast with squares of hard day-old bread, polenta and bauernbrot (German hard bread) and confiture (preserved fruit) from many indigenous fruits and berries. The Gruyere tasted different from my native Dutch cheeses such as Edam, Leiden and Gouda, but I learned to appreciate them and acquired a taste for many Swiss cheeses. At the evening meal we were given pitcher of red or white Swiss wine with our dinner consisting of gnocchi, spaetzle or spaghetti accompanied by Gamay grown in St. Gallen.

It is too early for this year, as the grape harvest will begin in the fall; but if you could, reserve a room in that fabulous hotel and indulge in their spa treatment and dine on meticulously prepared fare. You will imagine you were in Heaven. Start your day with a breakfast of cherries confiture on dry toast or many differing honeys on freshly baked bread. Or try Birgen Mueszle (the mouse of the mountain), an oatmeal concoction with dried fruits or muesli invented by health food nut Dr. Birgen some 70 years ago.

After breakfast partake in a spa treatment bath in warm turbulent mineral water in a private cubical. What do you have to lose but your girth? Take a long stroll and bring along a bottle of sussmost, a very special apple juice—apples are the main fruit grown in Switzerland—drink Swiss wines, nibble on Swiss chocolates and after a nap enjoy a dinner of fresh trout accompanied by a dry Swiss Chasselas.

Purchase an issue to read more about Swiss wine and dining.