All in the Family: Sheryl Crow Comes Home to Missouri 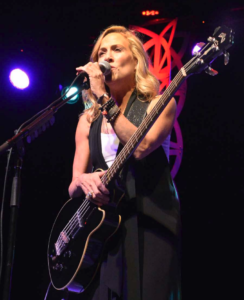 For Sheryl Crow, it’s all about family. The Grammy Award-winning singer and songwriter credits her wholesome family background in Kennett, Missouri, the small town where she grew up, for shaping everything she has accomplished. Her parents, she says, have been the greatest influence on her life, and “I still make decisions based on what they instilled in me,” she says. “We are very close—they are still confidantes and advisers.”

Likewise, Crow’s close relationships with three siblings helped deepen the family bond. Like most teenagers, the singer jokes, she could hardly wait to leave home, but now she has spent the last 20 years “trying to re-create what I had there.”

But this Midwestern girl’s strong sense of family goes beyond biological connection. In October 2015 she returned to her alma mater, the University of Missouri, to honor a different kind of family loyalty. She attended MU from 1980 to 1984, majoring in music, and came back to headline a weekend fundraiser for the School of Music for a new building. Crow met with university officials and played an acoustic show for a donor banquet at Mizzou Arena on Friday evening. The following night saw a full-blown concert at the Missouri Theatre, as the singer-songwriter and her band thrilled a large, enthusiastic crowd. Between numbers, she reminisced about her student days in Columbia and praised the university for shepherding her into adulthood. Clearly, Crow’s strong sense of family loyalty encompasses the “MU family” that nurtured her.

Sheryl Crow’s aid and assistance to MU is no small matter. Over the last 25 years, she has become a major figure on the American popular music scene. After moving to Los Angeles following college and a brief teaching stint near St. Louis, she experienced the usual hard knocks in climbing the ladder of professional success. There were crowded living conditions in a tiny house where one roommate worked as a seamstress for Van Halen and Poison (“there was all this spandex and big-haired band guys walking around”), while Crow scrambled to support herself by recording commercial jingles for In-N-Out Burgers, Toyota and McDonalds.

There were several stints as a waitress, punctuated with recording sessions as a backup singer for artists including Stevie Wonder, Belinda Carlisle and Don Henley. Then from 1987 to 1989, she worked as a backup singer on Michael Jackson’s Bad tour, a gig that brought her increased attention in the pop-music world.

Crow began hanging out with a group of musicians in Pasadena, California, and filling cassettes with her original tunes. Utilizing many of these players, she finally broke through in 1994 with her debut album, Saturday Night Music Club, with its hit singles “Leaving Las Vegas,” “All I Wanna Do,” “Strong Enough,” and “Can’t Cry Anymore.” It earned her three Grammys, including Record of the Year.

A long string of hits followed over the next few years. Songs such as “If It Makes You Happy,” “A Change Would Do You Good,” “My Favorite Mistake,” “Soak Up the Sun,” and “Steve McQueen” climbed the charts. All in all, Crow has released eight studio albums while writing songs for movies and Broadway shows and appearing in several films and TV shows. She also has toured relentlessly, giving hundreds of concerts all over the world with her band of first-class musicians. She also appeared onstage with some of the giants of rock and pop music, including Eric Clapton, B. B. King, Willie Nelson, Tony Bennett, Prince, George Strait and Sting. With nine Grammy Awards (out of 32 nominations) and sales of more than 50 million albums worldwide, Crow is a genuine music superstar.

She still can’t quite believe her own success, and often sits back and looks at her life with considerable wonder. “I have had some unbelievably satisfying experiences—I have opened up for the Dali Lama, I have played with the Rolling Stones, I have sung with Pavarotti, I have performed before presidents and known three of them,” she muses. “For a kid from small-town America, it is amazing. I would never have dreamt it when I was younger.”

But despite this flurry of acclaim, Crow’s deep Missouri roots continue to sustain her. Her hometown of Kennet, Missouri, population 11,000, sits deep in the Bootheel, only a few miles from the Arkansas border and a two-hour drive from Memphis. It is a slice of small-town America, a Midwestern version of Mayberry in the old Andy Griffith show, where everyone knows everyone else, neighbors are really neighborly, and daily life is a pageant of familiar faces.

“Life was a lot simpler then,” Crow recalls, where you walked to the local school on weekdays and went to the Presbyterian church on Sundays. “Saturdays revolved around hanging out and seeing your friends. Freedom was going around on your bicycle, and curfew was when the sun went down. Everyone knew everyone’s kids, and while you had freedom, there was a sense that people looked after each other.”

Activity in the Crow household revolved around music and literature. Her father, Wendell, was a lawyer and trumpet player, and her mother, Bernice, gave piano lessons. The children often gathered after the evening meal while Wendell read aloud to them from favorite authors such as Mark Twain and John Steinbeck. Crow grew up listening to Cole Porter and George Gershwin and became familiar with the Great American songbook.

Her parents also directly inspired her musical development. Wendell and Bernice played in a local swing band, and they would frequently come home from a performance singing and dancing, an occurrence that the Crow children observed with delight. For young Sheryl, family and music were simply inseparable. “At Christmas time, we were that family who stood around the piano and sang carols in harmony,” she jokes.

Crow grew up with a sense that music would play an important role in her life, but like most kids, her thoughts about the future were hazy. As a girl she particularly loved musicals, with their catchy melodies and romance and fantasy. At age nine, she was so smitten with Gene Kelly in the movie version of Brigadoon that she wrote to him in care of Warner Brothers and was thrilled to receive an autographed photo nearly a year later.

But upon reaching adolescence, she had no burning desire for a particular career. “To be honest, I didn’t think much about it,” Crow replied when asked what she had wanted to do when she grew up. “I had an annoyingly normal upbringing. I didn’t come from a broken home, didn’t have a tortured personality. I grew up loving music, dancing to American Bandstand every week, and listening to my parents and their friends playing music until the wee hours of the morning. I just knew that whatever I was going to do, it would be musical.”

In many ways, Crow’s idyllic youth continued when she came to the University of Missouri in 1980. She fit in quickly and smoothly, pledged the Kappa Alpha Theta sorority, joined an international music organization for women, served as a hostess for football recruits and their families on weekend visits and worked as a summer-orientation leader. On weekends, she sang with a local band, “Cashmere,” doing Heart and Pat Benatar covers at student parties and clubs around town. During her recent visit to MU, she indulged in a bit of nostalgia. “I just went into the old Bullwinkle’s (a Broadway club that is now the Field House),” she confesses with a laugh, “and when my feet stuck to the floor it brought back all the old memories.” But her “Cashmere” experience had long-term consequences. “I started thinking, ‘Boy, this would be a really cool way to make a living.’ ”

But Crow devoted most of her college days to the serious study of music performance, composition and education. She especially remembers the “juries” for classical piano recitals, where students memorized and played 12 pieces and received a formal evaluation every semester. These exercises, she still recalls, were nerve wracking but very rewarding.

She also remembers with particular fondness her stint in a university jazz group called “Singsations,” which gave her a thrilling taste of the outside world when they took a tour of Eastern Europe and performed in buildings and churches that were hundreds of years old. Upon her graduation in 1984, she had attained a solid foundation in music that would help her along the road to fame and fortune.

An important part of Crow’s musical stardom has been her success as a songwriter. Once again, her family played a crucial role by making songs part of daily life. “I’ve been influenced by what I grew up with—parents who were music lovers. They played a lot of standards, but also pop music, and I got introduced to country music at an early age,” she reflects. “But it really wasn’t until I was older and wanted to be a legitimate songwriter that I got interested in lyricists. I was influenced by James Taylor and Carole King early on, but also by Joni Mitchell and Bob Dylan and Leonard Cohen.” Their songs stuck in her brain and influenced her as a composer. “My main objective always was to write a great melody and a memorable lyric. I always go back to Paul McCartney’s “Yesterday”—super simple but memorable. You hear it once and it sticks with you, and by the second or third time you just know it.” Songwriting, she learned, was a product of both inspiration and perspiration. “Sometimes you craft a song, and sometimes it just comes quickly, so I go to the drawing board every day and try to be diligent.”

Crow’s impressive musical success also stems from her skills as bandleader. Peter Stroud, an ace guitarist and her musical director for the last decade, says that while she has a clear idea about her songs, she also gives her bandmates considerable latitude in contributing musical licks and pieces of the arrangement during both recording and performing. “Sometimes she will come into the studio with something definite and ‘boom,’ we will do it that way,” he explains. “Other times she will have a rough idea but will grab things from others and say, ‘let’s explore that.’ She is very perceptive creatively.” In other words, Crow practices both leadership and collaboration in putting together her music.

That same spirit informs her support for the MU School of Music: She wants to cooperate but is happy to take the lead. The music facilities, she notes, are badly in need of an upgrade. “When I got to the campus I saw how beautiful it was. Then I got to the music building and it was like walking into East Berlin and seeing that Stalinist architecture,” she quips. So she determined to help raise money to build a new music building. Crow argues that the arts are important because they “document a civilization—painting and music can really speak to you about the human spirit.” But they need to be nurtured in order to flourish, just like the broader university. She is a big fan of higher education because, just as in her life, “it has a major impact on what you end up becoming.”

Purchase an issue to read more about Sheryl Crow and her upbringing to success.