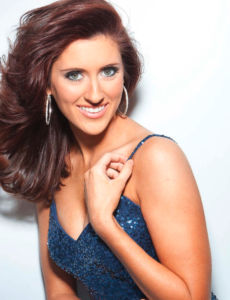 Growing up, Miss Missouri Erin O’Flaherty did not practice her runway walk in heels or drown her curls in hairspray behind pageant doors. Instead, she sprinted down soccer fields with her auburn hair pulled back in a ponytail and participated in 4H, a local leadership organization.

In high school, O’Flaherty was accepted into a track for advanced students. There, she accelerated far more quickly than normal. At age 15 she began looking at colleges, the same year as her older sister, Justin.

O’Flaherty had always been on the move with club soccer and balancing time between her mother in South Carolina and her father in Ohio. She had learned to love the travel, so she looked far away for her university of choice.

When it came time to make a decision, she was torn between Clemson, the College of Charleston and the University of Central Florida in Orlando. Her sister went with Clemson, so O’Flaherty decided to head the opposite direction to UCF. One particular program sealed her decision.

UCF’s Lead Scholars Academy program functioned as an honors and involvement organization that placed O’Flaherty in the same dorm as the other members. That was the starting base she needed in such a foreign place.

Once on her feet at UCF, she utilized her network of lead scholars to reach the involvement requirements of the organization. Coincidentally, the program led to pageantry.

The current Miss UCF titleholder was also in the underclassmen organization. After meeting and befriending her, O’Flaherty decided to enter the school competition.

Although her competitive soccer career had kept O’Flaherty away from pageants growing up, she had managed to squeeze in local talent competitions here and there. She was always singing.

Her greatest challenge was behind the scenes.

“The biggest adjustment for me was just going from playing on the club soccer team to figuring out how to put on makeup,” O’Flaherty says. “It was those kinds of changes I really needed to work on. I had never really walked in heels—that kind of stuff.” For her audition, she sang Sarah McLachlan’s “In the Arms of an Angel.”

After making the cut as a candidate, O’Flaherty and her 22 competitors had appearance after event after rehearsal for the next six months leading up to the pageant. She picked up eyeliner and foundation tips along the way.

When the day finally came, she still felt like she had no clue what she was doing, yet she managed to place in the top five.

“It wasn’t until then that my eyes were opened, and I thought that maybe I should really try to do something with this,” O’Flaherty says. “Just for being top five I won $2,000 in scholarship money, and being an out-of-state student [paying more], that was really important to me.”

ANOTHER STEP UP, AND ONE BACK

In hopes of gaining enough experience to go back to school and claim the Miss UCF title, O’Flaherty took her newly realized sense of potential and signed up for the Sweeps Pageant, a large competition that handed out six local titles. Several months later she wore a sash with the title Miss Florida Everglades and was handed a ticket to compete in Miss Florida. That too, was a learning process.

“That first year I definitely wasn’t prepared,” O’Flaherty says. “It takes a while to get acclimated to the pageant world and the Miss America system. I really wanted to do well and I was competitive, but I also was realistic about it.”

When she returned for her school’s competition, she felt as confident as ever. She had found her footing in the pageant world and was a second-time competitor. It was her year.

The process started off on a negative foot when the interview order was published. She would go first. In the pageant world, that slot came with superstition. After all, the judges had nothing yet with which to compare. In retrospect, however, it didn’t seem that her placement in line mattered.

“I came out of my interview knowing that I hadn’t connected with them at all,” O’Flaherty says. “I had a feeling. I just knew.”

Nonetheless, she was determined to do her best on stage in hopes of still making the top five. She was distraught when her name wasn’t called as a finalist, but knew it had been unlikely because of the unsuccessful interview.

It took one more year of experience within the Miss America system to put her on top at UCF. The contrast in competition results reminded her of an important pageant lesson.

“It was kind of crazy being in the top five, to not placing, to winning,” O’Flaherty says. “I think that’s just the nature of this kind of thing. It’s very subjective. On any given day the results could be totally different.”

After her year as Miss UCF concluded, so did her pageant career—at least for the time being.

“I thought I was done competing,” O’Flaherty says. “Three years takes a lot out of you, having to be ‘on’ all the time. I had won some scholarship money, and I was really happy and ready to close that chapter in my life.”

Before her final semester, she set her sights on St. Louis, Missouri,where she had been hired full time at Captiva Marketing after interning with them for the last three summers. From there, she finished her legal studies degree partially online, then on campus for her final semester.

Months and months passed before the “pageant bug” bit her. With the bite, she was filled with nostalgia and a sense of longing for her previous pageant environment. Although she was intimidated by the idea of starting competitions in a new state, she missed the camaraderie and business the pageant world brought.

So, two years out of the pageant routine, O’Flaherty signed up for the local competition in Kansas City where she won the Miss City of Fountains crown.

From there, it was back and forth between St. Louis and Kansas City in preparation for the Miss Missouri pageant. Going into the state contest, O’Flaherty was the oldest candidate running. However, that wasn’t the label she was worried about. It crossed O’Flaherty’s mind that if she were to win, she would be the first openly gay state titleholder in the system’s history.

Nonetheless, her mindset going into the competition was rather relaxed. Because she had been out of the pageant world for a few years, she didn’t have the weight of high expectations on her shoulders.

A solid interview and strong onstage performances in evening wear and swimsuit increased her confidence in the first round. Although she didn’t receive a preliminary award indicating she was first in a category, she remained confident that her performance was consistent across the board.

When the big night finally came, the contestants waited to hear their name among the finalists. Just when O’Flaherty settled into a satisfactory mindset, happy for the girls who were moving on, her name was called.

The rest of the night was a blur of onstage events and excitement. When she was crowned, O’Flaherty looked past the blinding lights to see her family jumping up and down in the audience. They had traveled to her this time.

A BIG STEP UP FOR HER CAUSE

The gap between her realization and the reality of the national pageant was only two months. That gave her time to brush up on current events and perfect her runway strut.

One thing that didn’t need any additional work was her platform of suicide awareness. That component was a decade in the making.

Her passion for prevention went back to her childhood. At age 13, O’Flaherty’s best friend took her own life, a loss she was not ready to deal with until college.

“Suicide is such a devastating loss, because so rare is there any kind of closure,” O’Flaherty says. “In the case of my best friend, there was no note, there was no explanation and we were only 13 on top of that. Who knows how to deal with that at 13?”

At UCF, O’Flaherty was finally ready to talk about her friend and take action. She found a network of support for suicide prevention and was quick to join. Once she began her pageant career, her platform was obvious.

Purchase an issue to read more about Erin O’Flaherty and her efforts towards suicide prevention.