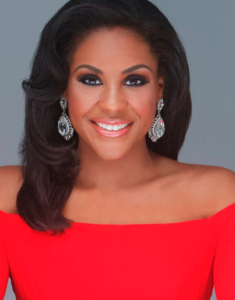 Born in St. Charles, Missouri, Jennifer is the youngest child with three older brothers. Her mother was delighted to do girly things indoors instead of watching boys’ sporting events in all types of weather. Jennifer won that first pageant and went on to win many more. As a child, she competed in both glitzy and natural pageants. In a natural pageant, no makeup is allowed except lip gloss and mascara. Several glitzy pageants were featured on The Learning Channel’s Toddlers and Tiaras. “Big hair and lots of makeup,” Jennifer says.

When she was five years old she was entered in the Little Miss North America pageant. She really wanted to win because the prize was a big teddy bear. When she won she asked her mother if she could be Miss America.

She got into cheerleading and soon was competing in the sport. Every weekend she was either in a cheer competition or a pageant. She is quick to say that her mother was never a stage mom. “She always asked me if I really wanted to do it,” Jennifer explains.

From ages 12 to 15, Jennifer competed in the Miss Missouri Teen USA. The USA organization differs from Miss America in that it doesn’t have a talent component. She was in the top five her last year competing in the USA organization.

Then she decided to take a break and stayed out of the pageant scene her junior and senior years of high school.

Jennifer’s freshman year at St. Louis University was something of a blur. She was determined to pursue her dream of becoming Miss America while taking 18 credit hours a semester toward a double major of Communications and Psychology and holding down three jobs. Oh! And she was on the cheer team for the university. She finally dropped her double major and graduated with a Bachelor’s Degree in Communications in May 2016.

Each summer throughout her college years, Jennifer participated in the Missouri pageant, climbing the ladder from being in the top 10 to first runner-up and finally winning the crown in June 2017.

It was Father’s Day Weekend. “I told my father it was the best gift I could give him,” Jennifer says. She remembers signing papers and being given the “rules” of being Miss Missouri.

After attending a party hosted by the Miss Missouri Organization later that evening, Jennifer was whisked away. She wasn’t even allowed to pack her clothes—everything was being done for her. She was introduced to Robbie and Cara Miller, who would be her host family for the next year. She was shown her bedroom at the Miller home—which she immediately named the Miss Missouri room—where she stayed awake all night, too excited to sleep.

For the next three months, Jennifer “hit the ground running.” She had been given a budget for all the clothes she would need for appearances and the pageant. She loved the gown she had worn for the state pageant so she decided to wear it again for the Miss America contest. She had an official headshot taken, practiced her talent and made appearances to promote her platform.

Jennifer said her defining moment was when she was asked to talk about her platform at the annual Speak Hard youth conference in Jefferson City. High school students from around the state comprised the audience. She talked about feeling different because of her race and about her brother, who is gay. After her speech, one of the adult chaperones asked to talk privately. The man said her talk, which included mentioning her brother, changed his mind about same-sex marriage. He said he realized one’s lifestyle should not take away human rights. Jennifer stood there stunned. She had always said if she could change just one person’s life… and she just had.

A Bollywood dance was Jennifer’s talent. She had originally taken a Bollywood dance class having been told it was good for the arms. “My brothers said my arms were so skinny that a strong gust of wind would break them,” she says, laughing.

Then she fell in love with the culture and decided to fully embrace it. She traveled back and forth to California to study under Nakul Dev Mahajan, best known as the choreographer for the television show So You Think You Can Dance. She didn’t want to offend anyone in the Indian culture, so she made sure she learned all the correct facial expressions and neck, head and hand movements.

Jennifer says she has been asked several times why she chose Bollywood as her talent since she isn’t of the culture. “The beauty of dance is that no matter where you come from, we can have a common denominator, and that is the love of dance,” Jennifer writes on her Facebook page.

Also, her platform issue is “United We Stand, Divided We Fall: Diversity Matters.”

“I believe that it is important to practice what you preach. Diversity Matters is much more than a platform for me, it is my life. Not only do I come from a diverse background, I have known the joy of embracing another culture fully,” she says on Facebook.

Purchase an issue to read more about Jennifer Davis and her journey.