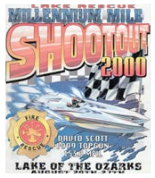 What began as a fundraiser for the Osage Beach Fire Department has grown into an event of amazing popularity — probably because it has kept its focus on one thing: racing fast boats on the Lake! This event has drawn hundreds of thousands of people to the Lake who may have never visited our area before. And it’s all thanks to a Lake area full of dedicated businesses, and an enthusiastic boating community which has kept the shootout going and helped it grow.

The shootout was started in 1988 by three individuals: John Page, who at the time was the Police Chief for the City of Osage Beach; Fran Steingrubey, a local businessman; and Kevin Hrubise, who is now Fire Chief of Rocky Mount, and at that time was with Osage Beach. It began as a ‘bragging rights’ event. As the story goes, there was a group of locals that for years would debate whose boat was the fastest. There were even stories of groups showing up in quiet coves and racing one another. In an effort to provide a safe venue for these boaters to prove their claims of the fastest boat, the shootout was born.

It was divided into classes or groups so single engines weren’t racing against double engines. People spent money over the winter to make their boats go faster. Bob Morgan came on board and went on to be a pro racer. Then the Seebolds got involved and also went on to pro racing, and Anheuser-Busch, then it just grew and grew.

The first year of the event, the Top Gun was 101 mph. The last year before moving to the West Side, the speed was 208 mph. For the first 19 years the shootout was held at the 21mm in front of the former Shooters’ 21 Complex. The original name was the Shooter’s shootout, then when fire departments in Osage Beach, Lake Ozark and Mid-County took ownership of the event it became the Lake Rescue shootout.

From day one, the local fire districts have been involved in the event, trying to provide a safe venue for anyone with a 22-foot or larger boat to run. This race has always been known for “Run What You Brung.”

Jeff Dorhauer, Osage Beach Fire Chief, has been involved in this event since 1989, year two. He worked on the course as a rescue diver, in inspections and for the last 11 years on the organizing committee, with 10 of those as Chairman.

In 2001, racer and Top Gun winner David Scott introduced Dorhauer and his team to Brett Becker, at that time the editor of Powerboat Magazine.This introduction, along with the sponsorship of Budweiser, was critical to the national and international growth of the event. Over the years, Powerboat Magazine several times has named the shootout the Top Unsanctioned Race in the Country. Part of their sponsorship was that the shootout Top Gun winner was featured on the cover. This was priceless for the race.

It brought participants from around the world who wanted to see their boat on the cover of this highly respected magazine. At one point they had representatives from 30 states and three countries racing at the shootout.

As the years went on, it became more difficult for the fire districts to manage the event. Dorhauer expounds: “We would start planning the next year’s event before the current year’s event had even started. After the 2007 race, the owner of Shooters 21 advised the committee that he would be tearing down the complex and pursuing a residential setting with the property, so the committee decided to accept proposals for the relocation of the event. Captain Ron’s was chosen — not only to host the event, but also after the first year to take ownership of the event. The fire districts released their rights to the name Lake Rescue shootout and Captain Ron’s and the West Side have taken this event to new levels.” They never envisioned the race growing to the echelon it has.