Miss Missouri Simone Esters: Before and Beyond Her Crown 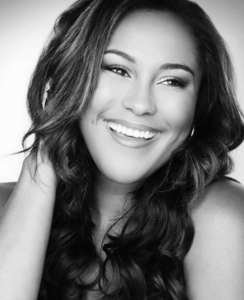 With each sip of her morning tea, Simone Esters awakens to a brand-new day. Often, it’s a sparkling day sporting her glamorous tiara and sash, as she’s currently Miss Missouri and Miss America 2.0 second runner-up. Her day is typically brimming with myriad activities, people and purpose. Her daily wellness routine is resplendently simple, yet structured so that it propels Simone beautifully toward her royal duties, as well as being a student at the University of Missouri-Columbia and a genuinely vibrant woman with a multifaceted, enticing future.

“I always start and end my day the same way, by drinking tea and with my facial regime,” Simone shares. “It’s consistent and that’s very important to me.”

Consistently striving toward greatness is at Simone’s core, where she has already succeeded on many stages throughout her young life.

“When I was born, the Earth literally shook,” Simone declares. “On January 30, 1999, an earthquake hit Fontana, California, where I was born. My mother says that it’s no coincidence that I have always shaken up the notion of what people might expect of me. Simone and her mother, Julie Fornadel, soon moved to be closer to family in Hermitage, Pennsylvania (north of Pittsburgh). This tight-knit community of 16,000 people was the backdrop of her youth. “The most formative part of my life was my baton-twirling experience. I started twirling in an Afterschool program when I was in kindergarten. I never would have thought it would take me to the places it has.”

Places made possible also by her mother’s steadfast love and support. “My Mom raised me as a single parent, and instilled in me the values that are the basis of my success.”

Continuing in school, Simone’s activities of dancing, playing tennis and baton twirling all required physical fitness. “Being in shape is very important to me,” she explains. “Both of my parents were athletes.” Her mother was a Division 1 basketball player turned educator; her father, Jeff Esters, had a professional career in the National Football League.

Her fitness and drive for excellence led her to be a 28-time national twirling champion, and travel worldwide to earn eight world medals.

“Most importantly, twirling is what brought me to the state of Missouri,” she explains. “When I was a junior in high school, I had to have hip surgery, so I had to find other outlets in which to express myself. That was writing. This is what drove me to pursue a career centric around writing. During my college search process, I knew I wanted to be a journalism major and to twirl at a large university. This made the University of Missouri a perfect fit.”

Simone moved to Missouri knowing only a handful of people. She confides that is what forced her to grow into the person she is today, making this one of the best choices she’s ever made. “My life has provided me with immense opportunities for personal development, and I am so thankful.”

She also is grateful to have auditioned in 2016, and been awarded the position of being a Marching MIZZOU feature twirler; she has been one ever since. One of her favorite times on the field was in the fall of 2017 as she performed with Marching MIZZOU to Disco Inferno at a Kansas City Chiefs football game at Arrowhead Stadium in Kansas City.

That same year was also her last to participate in competition baton twirling. “I knew that when I got to college I would begin to transition out of this phase of my life,” she admits. “Given my previous track record with twirling, I decided that I wanted to win a national title before I retired. That year I placed second by .5 points and I was devastated.”

Walking out of that competition she was asked if she had considered participating in the Miss America organization. So, she did the research that changed her life. With a big grin, she says, “Fast forward two years and I am Miss Missouri and living the best version of my life possible!”

Her winning season began with her very first competition—for the title of Miss Phelps County—with twirling as her talent. Then at the Miss Missouri competition, held at the Missouri Military Academy in Mexico, Missouri, she achieved second runner-up. Continuing to strive for the crown the next year, she entered and won the Miss Metro St. Louis title. Then, with more experience and attention to detail, she graced the stage of Miss Missouri, winning the Overall Top Talent and Evening Gown competitions.

She also expertly shared her social impact initiative, Leave your MARK (Mentor At Risk Kids); and showcased her co-founding a 501(c)3, Writeous Girls, which seeks to strengthen youths’ emotional and character development in a healthy way—by writing. Her finesse with poise and knowledge lifted her to the top over 27 candidates to be crowned Miss Missouri at the special 50th annual competition.

“I couldn’t believe it was happening to me,” she remembers. “It was surreal. I’ve made the greatest friends along the way. Miss Missouri friends are so unique. It was all worth it!”

Purchase an issue to read more about Simone Esters and her competition experiences.