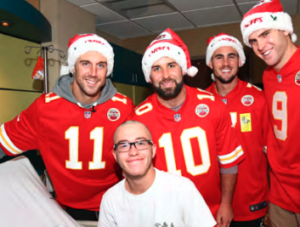 Throwing, catching and celebrating the value of giving. The Chiefs’ mission is to win with character, unite our community, honor tradition and inspire their fans. With each game played and each fan enabled by their time and generosity, the Chiefs Kingdom is strengthened and remains a strong beacon for others.

The Super Bowl Champions Kansas City Chiefs give it their all on the playing field. Off the field and outside the arenas they give just as much if not more.

This care of community is deeply rooted within the winning Chiefs organization. From multi-millions of dollars raised via a variety of events, to current players volunteering their time at hospitals, schools, camps and sports programs, the Chiefs fortify the Kingdom. The Kansas City Chiefs Cheerleaders go above and beyond visiting domestic and overseas U.S. Armed Forces bases. Through the Chiefs Ambassadors program, in which retired players give of themselves, all Chiefs’ efforts benefit and celebrate community and the very special people within it.

Years ago every Chiefs player had, as part of their contract, details stating that they had to spend a portion of time doing charitable works.

Since their beginnings in KC more than 50 years ago, the Chiefs have given back to communities. What was founded as the Chiefs Children’s Fund during one generation, became known in the next generation in 1983 as the Hunt Family Foundation. This 501(c)(3) organization has given vital support to more than 125 charities annually through volunteer programs and philanthropic events. They’re known for raising monies at their home games with their 50/50 raffle. They also raise awareness of—and celebrate—what individuals can accomplish. Each home pregame, the foundation honors individuals who serve their community by saluting “The Kid of the Game” and the game’s Drum Honoree.

A popular nongame day event to highlight children’s charities and raise needed funds is their annual Chiefs Charity game. They also have contributed millions of dollars through a variety of charities that support the health, wellness, education and fitness of underserved area youth. To name just a few, starting off the game season is “Red Friday” with the Chiefs Community Caring Team, along with businesses that sell flags raising millions of dollars for an individual charity that changes each year. The Chiefs support: KC-area Ronald McDonald Houses; Cornerstones of Care; City Year—Literacy; Souper Bowl of Caring; Chiefs Kingdom Food Drive—Lift Up America; Big Brothers Big Sisters; Toys for Tots; Special Olympics Fantasy Camp; Sports Lab and many more. In addition, the players take part in surprise visits and outreach.

One such area of outreach is coordinated through the Chiefs Ambassadors Club, the first in the NFL that’s been emulated by other teams. This select group of retired Chiefs players hold Ambassador fundraisers and carry the Kingdom further and deeper. It is well known that no other NFL team has this same strong namesake connection.

Ambassador Danan Hughes, former wide receiver for the Chiefs and 2019 honorary chairman of the HK’s Annual Hospital Benefit Golf Tournament, explains, “The Ambassadors give back to the community in dollars, in scholarships, with in-person events and much more. It also allows us former players to keep one foot in the locker room. We can help mentor the current players, plus have camaraderie. We don’t have to give up all of our Chiefs experiences. We have the best of both worlds.”

“The Chiefs Ambassadors and the players themselves are incredible to work with in helping to make the HK’s tournament successful since the late ’70s,” says Peter Brown, chairman of the tournament. “People including Walter White, Dustin Colquitt, Trent Green, Deron Cherry, Willie Lanier and many others all went way beyond to make the event spectacular and fun,” explains Susan Brown, daughter of Harold Koplar, the tournament’s namesake and founder of the Lodge of Four Seasons resort. It’s the Chiefs Ambassadors and the players’ time and talent, visiting the hospital, bringing souvenirs and more, all going to benefit Lake Regional Health System that makes a difference. The Lake of the Ozarks area is Chiefs Country, and the players and Ambassadors understand this, and think highly of this tournament and the good it does for the Lake community.

Purchase an issue to read more about the Chiefs’ contribution to community.