The Third Time’s A Charm 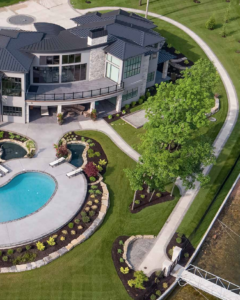 Leon and Dorothy McCullough are not novice Lake home builders. Their first home here at the Lake of the Ozarks was completed in 2005 but, although they liked the house, they saw a lot across the cove that was larger with more shoreline. The second home, with almost 9,000 square feet, took two years to build. The couple hadn’t planned to move from that extraordinary home, but when a buyer appeared with an attractive offer, they accepted. So three years ago, they sold the house and started planning another magnificent Lake home.

They were without a house for about two years while securing property and starting the design process. Their two prior houses were very traditional. But, “If we’re going to build,” Dorothy said, “let’s do something different.”

The design was done by the Thomas Construction team. Dorothy and Leon’s input was paramount in deciding the final design, which she likes to call transitional. The McCulloughs have a longstanding association with Thomas Construction. “We have built three houses for Leon and Dorothy, and we would love to build 20 more,” said one of the partners, Dan Lind, after completing the second house in 2016. “They are truly a joy to work with.”

This new home is night-and-day different from their last Lake home. The 8,000-plus-square-foot structure sits perfectly on two lots totaling nearly two acres that form a point. The lot is framed by a black aluminum fence featuring an electric gate. The fence keeps the grandchildren in the yard and allows space for Zack, their flat-coated retriever, to run.

“Thomas Construction is famous for placing the house perfectly on the lot,” Leon says. “We have a wonderful view of the Lake in every room. windows,” Dorothy says. “I love the views we have at this house.” All of the windows are equipped with motorized shades that can be operated remotely.

The foyer shows off walnut floors and a white lacquered barrel ceiling. The ceiling was originally stained wood, but Dorothy likes the clean look of white and how it brightens the space. On the wall beside the front door is a hand-carved Tulip Wood Chinese screen that the couple found in Palm Desert, California. From the foyer, a hallway leads to the master suite. The hallway also has a white glossy barrel ceiling and features an elevator big enough to accommodate four.

The master bedroom is done in calming shades of blue, white and taupe. There is a comfy sitting area in the room, and a huge sliding glass door directly in front of the king-sized bed, which opens onto the upper deck. One fascinating feature in the bedroom is a convex mirror that reflects the outside in an interesting manner. The master bath features a marble shower with a sliding glass barn door, double vanities with polished chrome fixtures and a water closet. A large walk-in closet here leads into the laundry room.

Also just off the foyer is the living room, with an open-floor design featuring a huge bank of windows that brings the outdoors inside. The room is done in shades of blue and taupe. A gas fireplace graces one of the natural stone walls, television above. The walls are curved with the windows following the lines. French doors open onto an upper deck. An open-design formal dining room is between the living room and the kitchen. The large, beautiful table is lined with 10 leather club chairs. When they aren’t entertaining, Dorothy uses the table to work on jigsaw puzzles during dreary, rainy weather. The magnificent kitchen is done in white and silver. A huge Cambria island cut at angles affords more seating. The taupe leather club chairs have been placed in front of and at the sides of the island, which has a double, under-mounted sink. The Dacor appliances include a six-burner gas stove, double convection ovens and a Sub-Zero refrigerator with two freezer drawers. There are several lighted upper glass-front cabinets showcasing display pieces. The kitchen is highlighted by a built-in Miele coffeemaker that can make a variety of beverages, and a stacked wine refrigerator capable of holding 200 bottles of wine. Behind the kitchen is the butler’s pantry with a bar sink, clear-glass-door refrigerator and open storage shelves.

Next to the kitchen-dining room area is the welcoming hearth room. This cozy family area features a stone fireplace, built-in shelves displaying antique Chinese warrior figurines and a television. “This is where we spend most of our time,” Dorothy says.

The last room on the Lakeside upper level is Leon’s office. “He got the corner office with a view,” Dorothy says. Graduated oblong windows bring in the view of the Lake and are a nice architectural touch. Leon’s antique French minimalist desk is in juxtaposition to the ornate hand-carved antique Italian hutch he had retrofitted to the space.

There are two covered patios for outdoor dining—one upper and one lower. The upper deck boasts a pizza oven in addition to an over-sized grill, and a table with seating for six. The lower patio has a grill, a built-in cooler and an under-counter refrigerator, all framed in natural stone. There also is a large screen television and seating area.

The McCulloughs can be defined as eclectic. “We like the unusual, playful and funny… something different,” Dorothy says.

Purchase an issue to continue reading about this eclectic home. Pictures are included within the issue.